Of Microwaves and Bicycles

Last week, my microwave oven went to the giant frozen burrito in the sky, so I called a repairman to come out and see if it could be repaired. He took one look at it and said it's not worth fixing and that will be $79.99. It was a top of the line GE Profile and had lasted eleven years.  The repairman told me that normally microwaves do not last that long, but this one had because it was a higher quality, and more importantly, was not made in China.  So what do microwave ovens have to do with bicycles?  A lot. You see, like modern microwave ovens, ninety percent of bicycles produced today are made by the same few companies in China.  Just like LG produces microwaves for Kenmore, Kitchen Aid, etc., so does Giant produce bikes for Trek, Canondale, etc.  That two hundred dollar Schwinn you see in Walmart is made by the same workers at the same factory with the same quality control as that $1,300.00 Trek at your local bike shop.  Last year, several big name "high end" bikes were having problems with the forks breaking, different brands but manufactured by the same Chinese firm. Bear in mind, these are bikes costing thousands of dollars. The bike shops took the bikes back and promised a replacement per the warranty, but things got ugly. You see, the Chinese claimed that there was no defect, but in fact the bicycle owners were the cause of the forks failing.  So the bike shops that exchanged the broken bikes were out, and the consumer that was promised a replacement, well they were out too. 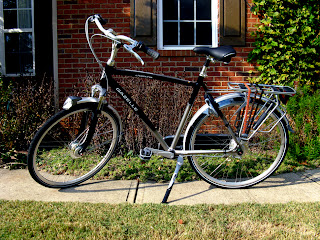 I asked the repairman as he was leaving, which brand would he recommend, he said it really does not matter because they are all the same, but there was one thing I should look for and avoid. a sticker that says "Made in China."
Posted by Matt Forbes at 3:07 PM 1 comment: 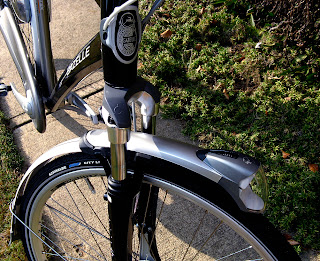 Posted by Matt Forbes at 9:13 AM No comments: