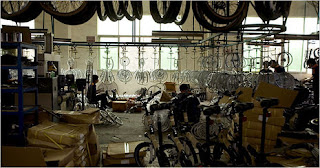 Zhang Jingming works at the Dahon Bicycle factory in Shenzhen, China assembling bicycle seats.  He was recently given a raise from $1.32 to $1.45 for every bike seat he produces. He works forty five hours per week, and the more seats he can churn out , the more money he will make.  Since his raise in August he has seen his monthly pay increase to $263.00. Yes, that is monthly.  Like most mass produced goods manufactured in China, it is not about quality but of speed.  What would motivate Zhang to assemble a bike seat and make sure it was properly made, bolts tightened, cover secured, etc?, well nothing.  That would take time and that would cost Zhang lost wages.  I don't think he really cares, or his plant manager, if you or your son or daughter wreck their bike due to a seat malfunction.  But the really scary part is, in this same factory under the same wage structure, workers are assembling rims, handlebars, brake components, and finally assembling the bike itself.  As a matter of fact,  about 90% of bicycles sold here in  America are made this way in China, Taiwan, or Japan.  Next time you ride your bike take a look at where it was made.  If your bike has a sticker that says "Assembled in the USA" that just means that certain components were not installed in China, but left off to be installed in the US in order to legally claim that the bike was "assembled" in the US.  Like maybe the kick stand and that sticker that says "Assembled in the US."
Posted by Matt Forbes at 7:39 AM 1 comment:

I was riding a Gazelle Toer Populair the other day and pulled into a small country store and gas station in Buford, Georgia called "Pop's Place."  This is not your typical Kwiki Mart kind of place, this is the kind of place that sells live bait, used tires, pickled eggs, you name it, there is even a live goat tied to the propane refill tank.  I stop by there at least twice a week to see what how the tomatoes look, grab a beer, or just see what Pop got in on trade. Sometimes it is stuff like used shoes, old farm equipment, he even has a wooden leg in there he will sell you.  Matter a fact, he will sell anything in his store, including his store, but he won't sell the goat.  And everything has the same price tag, which means there are no price tags, you have to ask Pop how much and you always get the same answer, "How much you give for it today?"  That's pretty much all I have ever heard him say in the ten years I have been going there. So anyway on this particular day I bought some boiled peanuts and as I was at the checkout counter Picket was ringing me up (I think they call her Picket because she has no front teeth, may even be Pop's daughter for all I know), and Pop is headed out front to sit in his rocker and eat lunch. I know it's his lunch time because I have witnessed this ritual at least fifty times, Pop grabs a loaf of white bread,  couple of tomatoes, a jar of Duke's mayonnaise, and a bottle Texas Pete and sits out front and eats tomato sandwiches. So I'm headed out and get on my bike and for the first time in over a decade Pop says something to me. "Dang pretty bike."  Icebreaker! So I look at him and say "How much you give for it today?''  He says if he had the money he'd give me a twenty dollar bill for it but he would not give me a ride home. Wanting to finally initiate a conversation, I tell him that I am in the bicycle business and this bike sells for just under $1,400.00, which was probably not a good way to start a mutual friendship. He looks at me and says, and I will try to quote here, "If you're gonna come in here all drunk and crazy, then don't come in here no more." 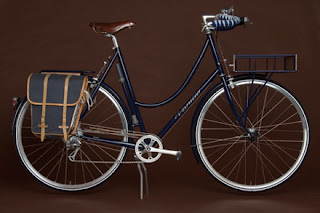 So I don't think Pop would be too keen on what has to be some of the most beautiful bikes being built anywhere today, Vanilla Bicycles. They are hand made in Portland, Oregon by Sacha White and are unique and made for individual customer requests.  Oh, and there is a five year waiting list. And there is a reason for that, because the bikes truly are stunning, enough so as to make Pop want to get in line for one. http://vanillabicycles.com/
Posted by Matt Forbes at 10:14 AM 1 comment: