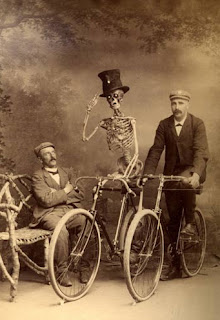 I'm not in the bicycle business because I think everyone should ditch their cars, put solar panels on their roofs, and only eat seaweed, I'm in it because I enjoy cycling for the pure fun of it.  Remember when you were a kid, playing cards in the spokes, a make shift cape made from a towel, flying down the hill pretending to be Superman? Remember when the "Chopper" craze hit about 1967,  Schwinn started making those Krate and Stingray bikes with the shifter built right on top of the frame, really cool until you caught the "twins" on the shifter knob, which you would do about every time you got on or off the bike. My brother was older so one Christmas he got a Lemon Peel and I got your basic Murray single speed.  I think my dad eventually felt sorry for me, so one weekend he brought home a used fork from another bike and we cut the two forks in half and fabricated a chopper fork for my Murray.  Now that Murray is a crap brand made in China, if you have a newer Murray bike and want to do the fork fabrication thing, don't go through the hassle of cutting the fork, just ride over a few bumps and the fork will split for you.  My Murray was American made and built to last, and with the chopper fork it did everything I asked it to do except turn.

Common sense says that very few people here in America are fortunate enough to be able to commute by bike to work on a regular basis.  The roads and infrastructure are just not bike friendly in most urban areas. Here where I live the county commission just approved $1.2 million for a bike path which is good news indeed, even if the new bike path will only connect certain public parks and not really have much of an impact on commuting to city centers.  But it is a start and will encourage more folks to start riding again.  Most of the designated bike paths where I live are not what Europeans know as bike paths, here they are just a four foot wide striped lane on the side of the road, and ironically are mostly on sparsely traveled rural back roads.  As soon as you get to a major intersection or close to a heavy populated area you get a sign that reads "End of Bike Lane" and the single designated stripe is gone. The bottom line for people deciding if commuting to work by bicycle is an option for them is practicality. It doesn't matter how many Green Peace, Save the Wales, Kiss Me I Recycle stickers you have on your bike, if you work thirty miles from home as the majority of people do in the county where I live, commuting by bike is not practical.

Unless you are Ed Begley, Jr.  For those unfamiliar with Ed, he is a B list actor here in the US and one of the many self proclaimed guardians of the planet, think Al Gore and that liar Paul Watson from the Sea Shepperd Society.  But Ed can walk the walk and talk the talk when it comes to bicycling to and fro. On Saturday you may see Ed in his cycle garb (he never takes his helmet off when the cameras are rolling just so you evil planet killers know he rode his bike here) at a benefit for the Spotted Owl in Hollywood, and then on Sunday here comes Ed rolling up at a fund raiser for the Dimpled Beaver in Denver.  And since Ed wants you to think he rode his bike to Denver from Hollywood overnight, he's out of breath and chugging on a bottled water. And of course Ed will recycle that water bottle even if it does cost twice as much in energy to recycle a plastic water bottle than it does to produce a new one. Here's a clip of Ed's tires coming off the rims in an interview with Fox News http://www.youtube.com/watch?v=j-rFmnhIdes  Hey Ed, quit jammin' me.

The benefits of bike riding are numerous, it's good for you health, it's cheap, it's fun, and yes it is environmentally beneficial.  But how eco friendly can it be, I mean they make bike racks for cars for a reason.  Just a week ago the BPA Power Company in Eugene, Oregon drafted a policy that would turn off several energy wind turbines because they are producing too much power.  The Endangered Species Act makes it a federal crime to shoot a bald eagle which is good, but also makes it a federal crime to pick up a feather from a bald eagle if you happen to find one laying in your front yard.  And if God forbid a couple of bald eagles decide to build a nest in a tree on your property, guess who has to move out?  Which is why some people may be inclined to shoot an animal on the endangered species list, it happens a lot for that very reason. In Georgia where I live, you cannot purchase alcohol on Sunday, but you can drive to a bar and drink enough to float a battleship and then drive home and hope you don't kill somebody.  Where's the common sense?
Posted by Matt Forbes at 12:36 PM